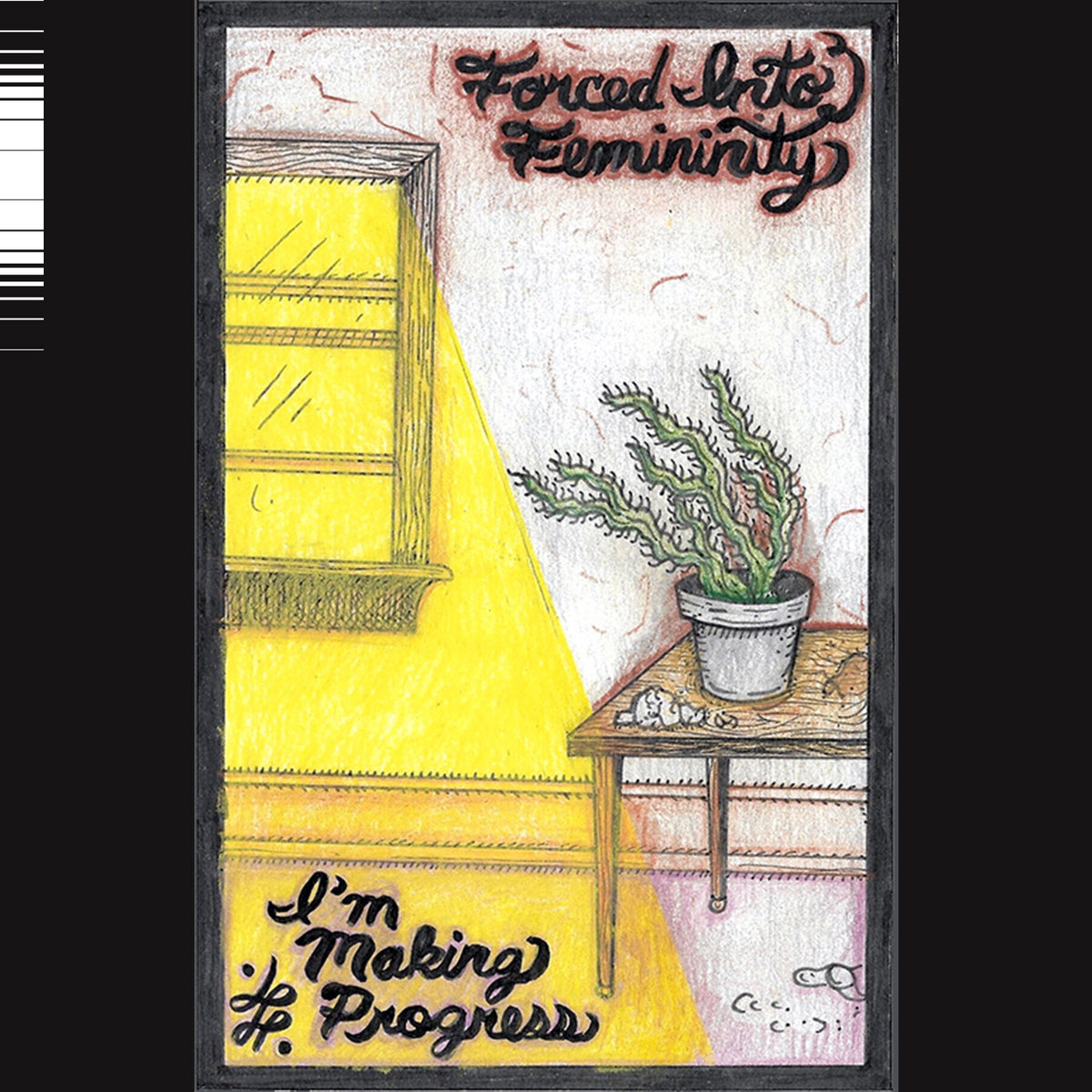 I have decided to periodically use this page to promote music I have had no hand in making or distributing. I will be writing reviews of works I find highly inspiring and incredibly valuable in current experimental music. This is one of those reviews.

If you don’t feel like reading the rest of this review, Forced Into Femininity’s “I’m Making Progress” can really be summed up in one sentence: this is the audio equivalent of a Facebook argument and I can’t turn away.

I don’t mean that in a facetious way and I’m not trying to discredit the cassette. The whole tape is really great. It just happens to sound like a twitter spat was transformed into a piece of audio, providing the same morbid thrills that come from downscrolling through pools of self-righteous bile masquerading digital content (as if that were a better option).

From a sound design perspective, the instrumentation and arrangements couldn’t be more bloated. Blown out lo-fi synthesizers, static blips, and clattering drums flop into each other and bounce off speakers like a slow-mo replay of a shitty car from an early Walt Disney animation. There's a sense of rhythm in here, but one that only comes from the constant repetition of each loop. Individual instruments, while probably fine on their own, barely line up with each other. Trying to nod your head along with any of these songs feels so similar to tripping on the sidewalk that I may have checked my shoelaces a few times, despite writing this in bare feet.

And while inspiring this sense of sea sickness is a great trick on its own (any US Maple fans out there?), the cassette reaches another level when paired with the unfettered howls of Jill Flanagan. The vocals throughout this work sway between overly-worked operatic passages, spoken word segments, and full blown screams. If this sounds overly dramatic, it is. In the best way possible. Especially when paired with the lyrics, all of which seem to thematically revolve around self-important declarations of identity, complete with a noted lack of self awareness. The sound of this tape may be the internet personified, but the lyrics represent its pitiful, electric core.

Take “My Greed,” for example. It’s a song about the safe space debate. Not safe spaces, per say, but the debate around it. The idiotic back and forth from literally every single person with access to a keyboard. It’s a song about those barging into the conversation, hoping that their voice will be heard, despite the fact that they are not the ones who need these spaces. Phrases like “ my cruelty is without intention, it’s not worth being mentioned, it’s so incredibly easy, because of my courtesy to everyone around me ” and “I thought everyone would stay in their place, I thought your presence would be erased, I don’t feel space because I’ve taken up all the space, taken up all the space” are delivered with such an overwhelming sense of bravado that the message behind these declarations almost gets lost. And the message is that I am important and I get whats going on and I am #woke and I need to YOU to recognize this. Thoughts on safe spaces are clearly secondary.

This is why this album reminds me so much of the “discourse” that exists on the internet. Every twitter war, every facebook thread, every comment section and every blog starts to look so similar after such a short period of time. The argument fades into an afterthought as authors proudly strut their way onto the internet’s stage with chest pushed out to the very edges of their ribcage. They grab their megaphones, point them at the nearest microphone and loudly opine on the subject of the day. Except their opinion is always the same: “Everyone! I am incredibly important! Pay attention to me!”

So instead of reading another garbage think piece, listen to this cassette instead. You get the same effect, but it is a much more enjoyable experience.

For those who like to check out physical goods in person before buying (and, you know, not pay for…

Hey there, friends! For anyone that missed the Bridges of Königsberg set at the Jazz Gallery a few weeks…